Once again, a player we’ve grown to love watching says goodbye to us. News broke today that The New York Yankees (sigh) are set to acquire Joey Gallo in a trade.

He’s one of those players who caught our eye really early on, with whisperings of this guy who could hit homers like nobody’s business. He’s only played in Texas while he’s been in the majors (7 years). He was one of ‘our’ guys. Besides holding some impressive HR stats, he grew into quite the outfielder over the past several seasons.

I’ll never forget anticipating seeing Gallo hit in Frisco. I think it was 2015 when we would go watch to see how far he’d hit it. It came off his bat different. That kid had something, and sure enough, he made a name for himself in the Rangers system.

This trade for Gallo will involve 6, yes, 1, 2, 3, 4, 5, 6 minor league players. If that doesn’t depict Joey Gallo’s big presence then I don’t know what does. The players are rumored to include two right handed pitchers, two second basemen, a shortstop, and an outfielder. And, to be honest, it’s not likely I would recognize the names at this point. Minor leaguers don’t usually hit my radar until they land in Texas or are playing against the Roughriders and making a name for themselves (or a huge college prospect out of Texas).

We’ll miss Joey around here. I think he’ll miss Texas, too. Last night he jumped the gun a little, thanking the fans in a post-game interview by Emily Jones. He said he wanted to take the time to say thank you right then in case it was his last change. And, sure enough, it was. 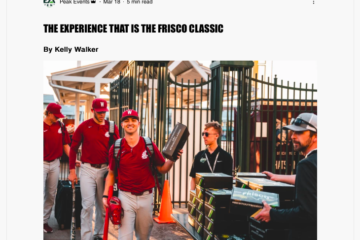