This article originally published on VisitFrisco.com

The anticipation of football season in Frisco is palpable. From the star-studded NFL experience to the high school teams, cheerleaders, and bands showing out, the season is here, and it is everything. Just as pre-season brings the anticipation and in-season play carries the momentum, there is high-level, end-of-season action in Frisco to satiate the football appetite for alumni, students, families, and fans from all over the country. Think all-star high school football at The Star, college bowl energy under the lights at Toyota Stadium, and championship competition bringing college rivalries to the forefront. It’s all in Frisco, so make your plans to be here.

Frisco’s lineup of marquee games to round out the football season:

The U.S. Army Bowl brings the top high school football players in the country together for an East vs. West game at Ford Center at The Star and airs on Bally Sports Network. Legendary college coach Noel Mazzone heads up the National Selection Committee looking at the top players, and the Top 80 get the official invite to play in the U.S. Army Bowl. Top 10 players to receive the invite include top-ranked Jaden Rashada from Pittsburg High School in California, Arch Manning, a University of Texas commit and nephew to quarterback legends Peyton and Eli Manning, and Texas’ own David Hicks, Jr. from Paetow High School.

The U.S. Army Bowl was created by Rich McGuinness 20 years ago, and he continues to take pride in the legacy, the alumni, and the unique experience it provides to players, families, and fans throughout the week of robust football activities.

McGuinness says, “We believe Frisco is the epicenter of football in the world, truly. Besides the Dallas Cowboys brand that’s been the great power in professional football and valued brand in the NFL, the culture is amazing. If you are going to run the biggest football week in America, you gotta do it where football is celebrated. The Cowboys have built a village around football so why not bring the world’s best players to a place that loves and celebrates football.”

For a pure college bowl game experience, it’s the natural grass field under the lights of Toyota Stadium on Saturday, December 17 at 8:15 p.m. for classic Football Bowl Subdivision (FBS) action at the Frisco Bowl.

“The Frisco Bowl is a wonderful event for families, local businesses, and anyone who loves college football,” said Kristen Shaver, director of events and football operations, ESPN Events. “Played on a Saturday night during the Christmas season, the bowl offers a great environment to watch two top-level programs and welcome their fans to a local community in Frisco, Texas that absolutely loves sports.”

Part of the great environment of the Frisco Bowl is the tailgating scene at Toyota Stadium. Visiting and don’t have what you need? Tailgreeter.com handles it for you. Once you have your ticket, simply show up to enjoy the 3-hour buffet and premium bar, big screen TVs to stay up to date on other college games, and enjoy your pre-game experience.

Inside the stadium, the ESPN Zone VIP Pre-game Party happens in the National Soccer Hall of Fame Club. Your VIP ticket includes your Frisco Bowl game ticket, VIP parking pass, activities and games, college football on the TVs, merchandise, plus heavy hors d’oeuvres, carving station, and a premium beverage package for two hours before the game.

Champions are made in Frisco. It’s not hyperbole. The NCAA Division I Football Championship Subdivision (FCS) is one of Frisco’s highly anticipated and eagerly attended games.

Toyota Stadium is home to the best championship memories in college football, let alone filled with the loud and loyal alumni and fans who circle the date on their calendar to make the trip to Frisco. While the defending FCS Champion is North Dakota State University, the Bison are joined by these teams who have also hoisted the trophy in the 12 years Frisco has hosted: Sam Houston State University, James Madison University, and Eastern Washington University.

“We make a point to buy tickets whether our team is playing or not,” says Frisco resident and longtime North Dakota State University fan, Ann Anderson. “How often do you get the chance to go to a national championship football game in your own town? Even if you don’t know the teams that are playing just to go is fun because the teams leave it all on the field. The fans are great, the band, the cheerleaders, and the entire experience is really amazing.”

How are the teams determined to vie for this title? The FCS Playoff Selection Committee selects and seeds teams from these 14 conferences: Big Sky, Big South, Colonial Athletic Association, Independent, Ivy, Mid-Eastern, Missouri Valley, Northeast, Ohio Valley, Patriot League, Pioneer Football League, Southern, Southland, and Southwestern. When the 24-team bracket is set, they face off in a single-elimination bracket-style playoff. As winners advance, they get one step closer to their ticket to Frisco on January 8, 2023.

Play and Stay in Frisco

Clearly, Frisco is the place to be for football fans across the country to bring the season to a close in style. Come for the football. As the City That Plays, stay a while to experience all of Frisco’s offerings from wining and dining, events, and entertainment, shopping, and accommodations. For updates on these games, sign up for our e-newsletter. 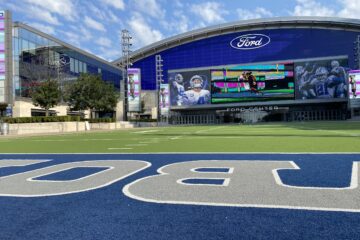 Tour of Homes, America’s Team Style at The Star

I had the pleasure of writing a recent post for Visit Frisco: Home to America’s Team: Explore The Star I am no stranger to The Star. I live only a few minutes away, my husband Read more…